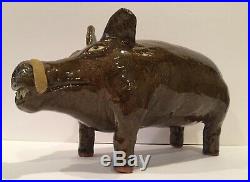 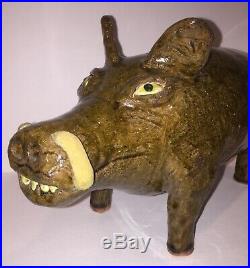 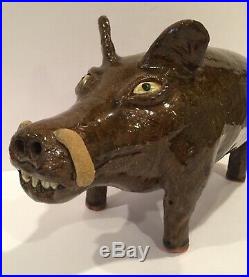 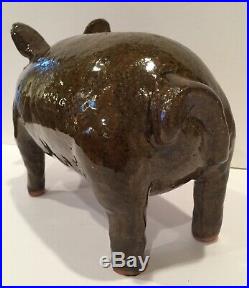 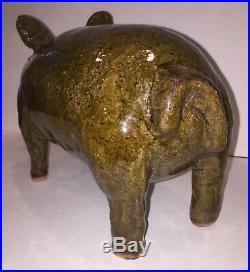 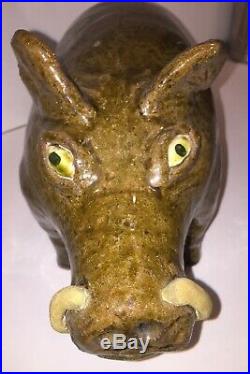 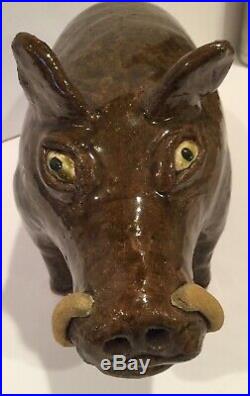 REGGIE MEADERS STONEWARE BOAR / PIG LULA GEORGIA. Alkaline-Glazed Stoneware Figure of a Boar, Signed “Reggie Meaders”, Cleveland, GA, late 20th century, figure of a standing boar with wheel-thrown body and applied features including large ears, unglazed white-and-blue black eyes, and white teeth (note 4 teeth) quite rare and long tusks, the surface of the figure covered in a mottled brown alkaline glaze. Underside incised “Reggie Meaders”. Excellent, essentially as-made condition. Reggie Meaders is the second son of Arie and Cheever Meaders. Like his brother Lanier, he is known for his face jugs but is also known for his animals: chickens, pigs, elephants and owls and dont forget the dinosaurs. Another distinctive quality of Reggies work is his glaze colors which range from brown to yellowish-brown to green. Any of his unique pieces are a wonderful addition to a collection. The item “REGGIE MEADERS STONEWARE BOAR / PIG CLEVELAND GEORGIA / (1916-2009) SOUTHERN” is in sale since Sunday, November 24, 2019. This item is in the category “Antiques\Primitives”. The seller is “littlebrownjugs” and is located in Lynbrook, New York. This item can be shipped to United States.