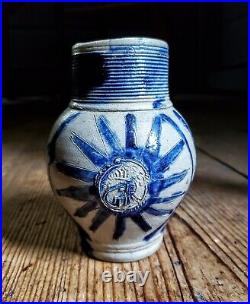 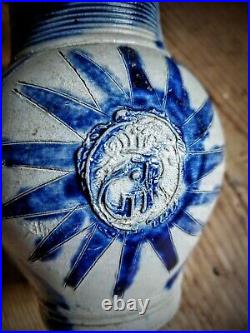 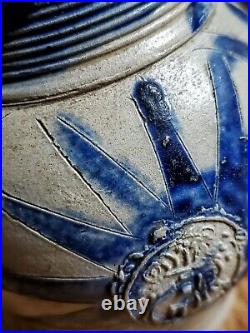 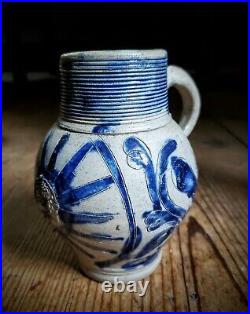 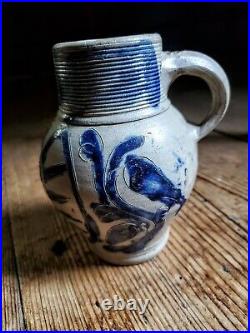 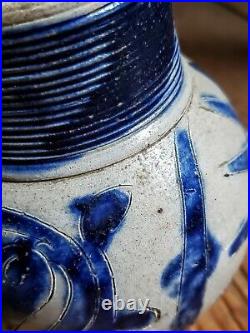 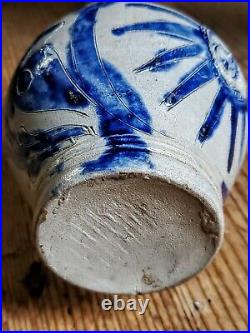 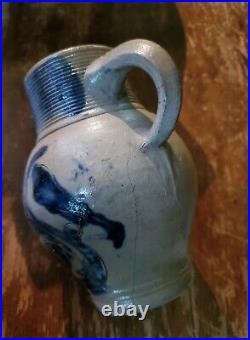 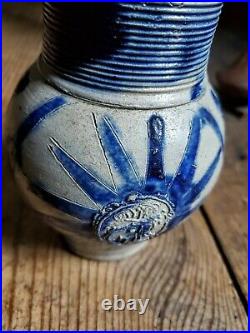 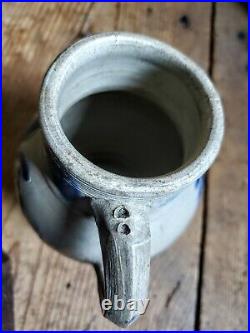 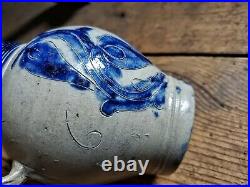 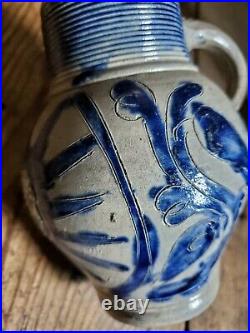 18th century Westerwald stoneware GR jug. A lovely early 18th century small Westerwald steinzeug, grey salt glazed stoneware jug with a small medallion, commemorative GR cypher for Georgius Rex II. Decorative incised sunburst and foliage in cobalt blue around the medallion, bulbous ovoid body, applied handle and a reeded cobalt neck. Very good, no repairs but a thin long hairline on the back and on the handle, otherwise intact the hairline crack is going nowhere it has been there for many years and since I had it for 28 years. These stunning jugs and mugs were brought to the 13 American colonies. This is a fragment of a stoneware jug produced in the Westerwald region of Germany. German stonewares played an important part of the English and colonial ceramic market of the eighteenth century. These vessels were available in a variety of forms but most commonly as jugs, mugs and chamber pots, and were most often decorated with a combination of incised and molded decorations enhanced with the use of cobalt and manganese underglaze painting. Generally, the prevalence of these kinds of stoneware diminished throughout the eighteenth century. This jug form was commonly used in the serving of alcohol at the table, though obviously it may have been used to serve a variety of liquids. The medallion is further embellished with a molded crown, floral elements, and a cherub. Just above the wings of this last, the placement of the molded initials SW indicate this vessel is a type that was of two-quart capacity. The neck of the jug can be seen to be painted in manganese purple, a feature that generally declined in popularity after about 1740. Measurements taken from multiple sherds accordingly. The item “Small 18th century Westerwald stoneware GR jug circa 1750″ is in sale since Tuesday, November 9, 2021. This item is in the category “Antiques\Primitives”. The seller is “bird1759″ and is located in Coventry, Connecticut. This item can be shipped to United States, United Kingdom.